The Most Dangerous Insect on the Planet 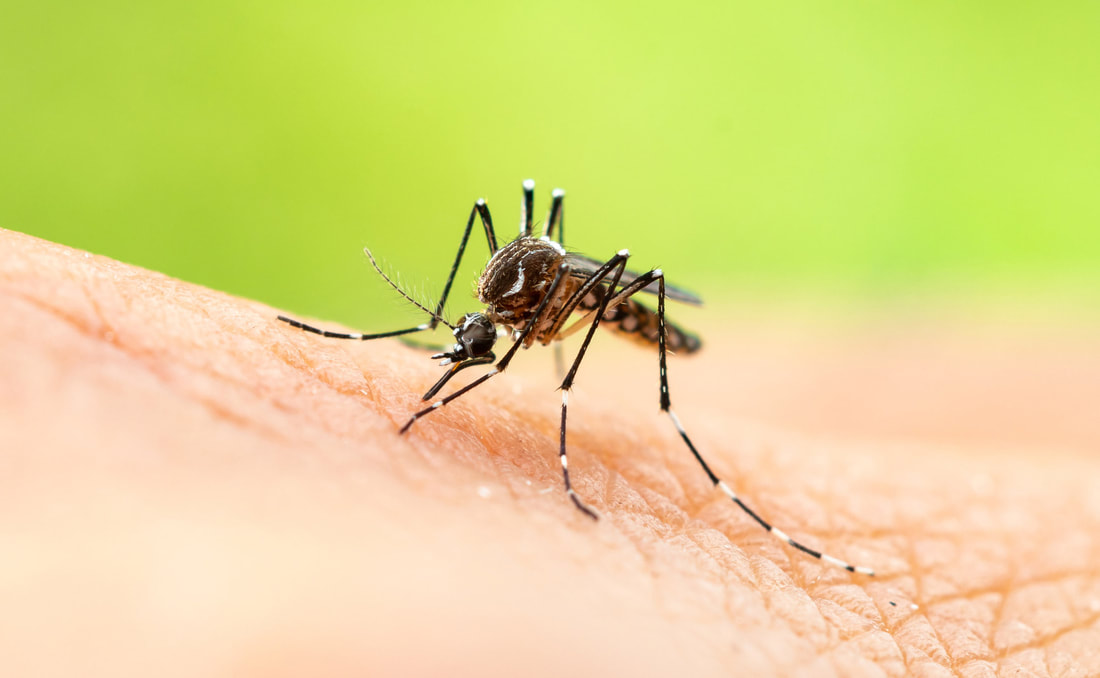 ​Mosquitoes kill more people in Africa every year than any other creature. Take it seriously. Every year, millions travel to countries where serious, insect-borne diseases are present. They often get bitten and return home to find their local medical experts struggling to identify let alone treat what they have. It is much better to take precautions and avoid being bitten. The following information is provided to assist you:

Mosquitoes are the most "successful" of biting insects, and are often called the deadliest or most dangerous creature on earth, playing a major role in the global spread of serious infectious diseases such as malaria and dengue fever. Mosquitoes infect up to 500 million people each year with malaria, and cause over a million deaths annually. They are most active at dawn and dusk, but bites can occur at any time of day or night.

Malawi is home to most of the various strains of malaria and hence is a major centre for research and studies in malaria. The Malawi International Center for Excellence in Malaria Research (ICEMR) has been established to combat this serious problem which it is said kills 1 in 9 children in Malawi under the age of 5yo.

Ticks and biting flies also transmit diseases, such as Lyme disease, typhus, leishmaniasis, and other tropical and infectious diseases. Fortunately, many of the same methods we use to combat mosquitoes are equally effective against these insects.

How can we protect ourselves?

The combination of topical insect repellent applied to the skin, and insecticide applied to clothing, will provide excellent protection against insect bites. Using mosquito nets treated with Permethrin is very helpful. However, the nets need to be used properly, ensuring that they reach the ground, do not have holes or gaps, and that children's limbs will not rest on the nets during the night, otherwise mosquitos can bite through the holes in the netting.

·         DEET is a most effective and widely used topical insect repellent, and repellents containing DEET should be considered the first line of defense in the battle of the bites. DEET works by masking the odor of carbon dioxide given off by the body (bugs find this odor irresistible), thereby making us unattractive to the insect population.
·         Natural Repellents. The oils of many plants have been shown to have repellent properties, including citronella, camphor, lemongrass, clove, eucalyptus and others. Although typically less effective than DEET and requiring more frequent applications, natural repellents are a great alternative for young children or those who are allergic to repellents containing DEET.
Insecticides
·         Permethrin. Unlike DEET, which is used as a topical repellent, permethrin is an insecticide applied only to fabrics - primarily clothing and mosquito netting. It is a synthetic formulation of a natural insecticide produced by chrysanthemum flowers, and is non-staining and odorless. Although highly toxic to insects, permethrin, when used correctly, is not hazardous to humans, as very little is absorbed through the skin, and any that is absorbed is quickly metabolized.
·         Insect Shield Clothing® by ExOfficio® does the work for you! The Insect Shield treatment binds permethrin to fabric fibers, resulting in effective, odorless insect protection that's EPA registered, recommended by the Centers for Disease Control and the World Health Organization, and is effective for up to 70 washings.

Where does malaria occur?

What are the signs and symptoms of malaria?

Symptoms of malaria include fever and flu-like illness, including shaking chills, headache, muscle aches, and tiredness. Nausea, vomiting, and diarrhea may also occur. Malaria may cause anemia and jaundice (yellow coloring of the skin and eyes) due to the loss of red blood cells. Infection with one type of malaria, P. falciparum, if not promptly treated, may cause kidney failure, seizures, mental confusion, coma, and death.

How soon will a person feel sick after being bitten by an infected mosquito?

For most people, symptoms begin ten days to four weeks after infection, although a person may feel ill as early as eight days or up to one year later. Two strains of malaria, P. vivax and P. ovale, can relapse; some parasites can rest in the liver for several months up to four years after a person is bitten by an infected mosquito. When these parasites come out of hibernation and begin invading red blood cells, the person will become sick.

Any traveler who becomes ill with a fever or flu-like illness while traveling and up to one year after returning home should immediately seek professional medical care. You should tell your health care provider that you have been traveling in a malaria-risk area.

How can malaria and other travel-related illnesses be prevented?

·         Visit your health care provider 4-6 weeks before foreign travel for any necessary vaccinations and a prescription for an antimalarial drug. Click here for Travel Clinics at Home and Abroad.
·         Take your antimalarial drug exactly on schedule without missing doses.
·         Prevent mosquito and other insect bites. Use insect repellent on exposed skin and flying insect spray in the room where you sleep.
·         Wear long pants and long-sleeved shirts, especially from dusk to dawn. This is the time when mosquitoes that spread malaria bite.
·         Sleep under a mosquito bednet that has been dipped in permethrin insecticide if you are not living in screened or air-conditioned housing.

The first line of defense against mosquitoes is to seal their point of entry. Mosquitoes are most active in the early morning and early evening. They seek areas of still air because they are hampered by breezes. Close windows and doors on the side of your house which are opposite the breeze. Minimize exposed skin areas by wearing long-sleeved shirts and long pants, if possible.

·        The most important measure you can take is to remove standing water sources. Change birdbaths, wading pools and pet's water bowl twice a week. Keep your eaves troughs clean and well-draining. Remove yard items that collect water.
·        In a New England Journal of Medicine study, oil of eucalyptus at 30% concentration prevented mosquito bites for 120.1 minutes, while Bite Blocker with 2% soybean oil kept bites away for 96.4 minutes. (the eucalyptus oil must have a minimum of 70% cineole content, the active therapeutic ingredient.) Citronella, a common alternative to DEET, performed poorly, warding off bugs for only 20 minutes.
·         If you're using the barbeque, throw a bit of sage or rosemary on the coals to repel mosquitos.
·        An effective natural bug repellent, mix one part garlic juice with 5 parts water in a small spray bottle. Shake well before using. Spray lightly on exposed body parts for an effective repellent lasting up to 5 - 6 hours. Strips of cotton cloth can also be dipped in this mixture and hung in areas, such as patios, as a localized deterrent.
·        Neem oil is a natural vegetable oil extracted from the Neem tree in India. The leaves, seeds and seed oil of the Neem tree contain sallanin, a compound which has effective mosquito repelling properties. Neem oil is a natural product and is safe to use. Look for new Neem Oil-based commercial products on the market.
·        Planting marigolds around your yard works as a natural bug repellent because the flowers give off a fragrance bugs and flying insects do not like.
·        Campers often report that the very best mosquito repellent is Avon Skin-So-Soft® bath oil mixed half and half with rubbing alcohol.

Aside from using a natural mosquito repellent, knowing when your body is most vulnerable is a plus. Carbon dioxide attracts mosquitoes, therefore when you are hot or have been exercising, mosquitoes may find you extra-tasty. They are also attracted to moisture and that includes perspiration. Exercising, as well as eating certain foods high in salt and potassium, will make your system release a greater amount of lactic acid, which will lure the mosquito population. It is not only perfumes, shampoos, body lotions, body washes, and sunscreen on your body that make you vulnerable to bites, but also the subtle fragrances of dryer sheets and fabric softeners in your clothes.

Things to Avoid:
​Other Avoidance Hints:

Instead of, or in addition to, using insect repellents, there are also many steps that you can take to avoid insect bites. These protective measures include:
While long-sleeve clothing may not seem like a good option during the spring and summer because of the heat, it does offer double protection against the sun and bugs. Thin, loose-fitting clothing, while not as protective as thicker clothing, may help to make it more tolerable.

Things that Lower Repellent Effectiveness
Use eucalyptus oil, tea tree oil and other essential oils. Mozzies do not like oily skin.

Once bitten: Some anti-itch drugstore medicines to use include Calamine lotion or cortisone creams. Doctors generally recommend pain relievers, ice packs and meat tenderizer to treat insect bites and stings. Promptly applying a dab of commercial meat tenderizer directly to a sting can neutralize the allergen.

​What You Need To Know
Protect yourself from mosquito bites:


With thanks to the Malawi International Center for Excellence in Malaria Research (ICEMR), CDC, Magellans.com and Craig Manners for the information on this page.